Used powered parachutes come at an affordable price and provide the perfect platform for photography and sightseeing. 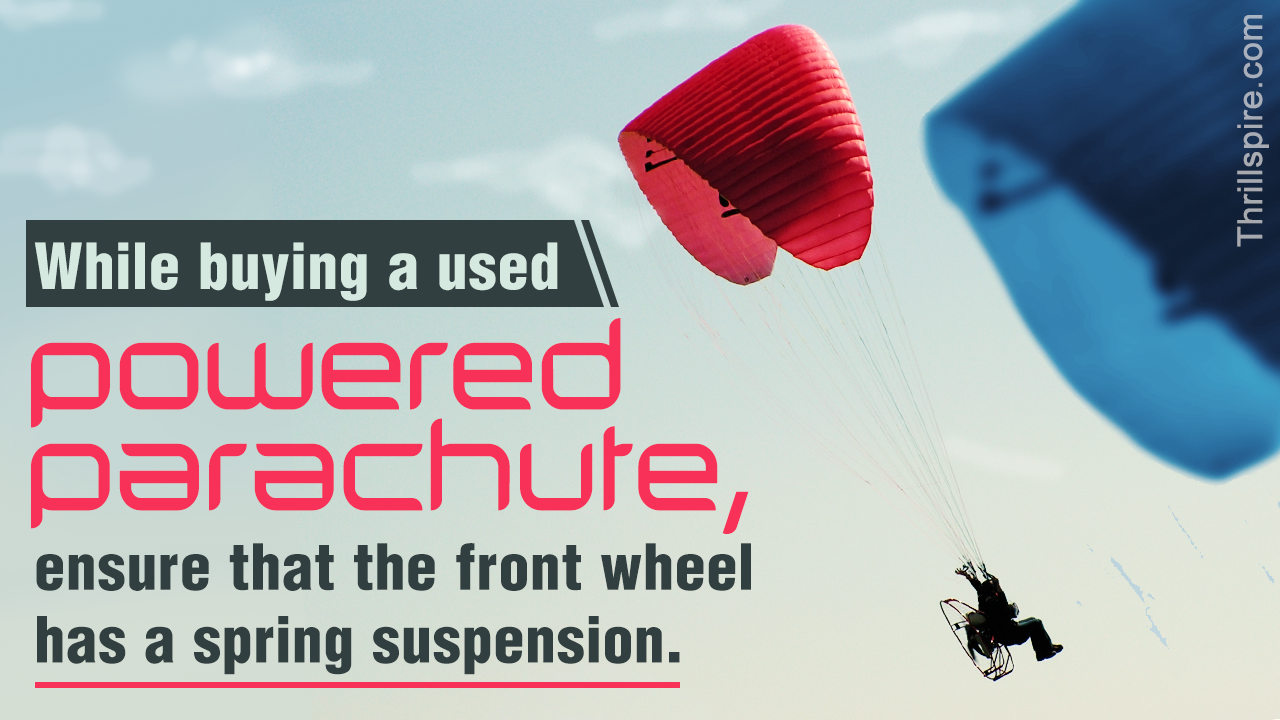 Used powered parachutes come at an affordable price and provide the perfect platform for photography and sightseeing.

Maneuvering a parachute can be quite difficult when the wind is blowing at a speed of more than 15 mph. So avoid flying in such windy conditions.

A powered parachute (PPC) is a parachute that uses a motor to fly in the air. It is also equipped with a three-wheeled cart and backpacks where the pilot can sit comfortably. A powered parachute is specifically designed keeping the user’s safety in mind. Even if the motor stops working in mid-air, there is no need to panic as the huge parachute attached to the machine will enable you to land safely. The parachute’s speed ranges between 25-35 mph. Due to their inherent stability and stall resistance, PPCs are considered to be very safe to fly. The fuel tank has the capacity to store 5-10 gallons of fuel which allows the aircraft to fly for around 3 hours at a stretch.

Those learning to fly a powered parachute should purchase a used one. Once you overcome the initial fear and become confident about parachuting, you may consider buying a new one. However, before you decide to get a used powered parachute, check out the following parameters that dramatically influence the overall experience of flying this vehicle.

The material used in making the parachute should be of high quality. Popular parachute material are nylon and Terylene, as these fibers are heat-resistant.

Check if the front wheel has a spring suspension. This will prevent damage to the aircraft in case you land in adverse conditions.

The engine power does not influence the airspeed of the parachute. No matter how powerful the engine is, the parachute does not travel more than 35 mph in the air. The engine power and the propeller only help to generates the necessary thrust (force to push it in the forward direction) on the ground to take off. Low engine power may cause poor thrust performance, resulting in longer take offs.

The type of wing (elliptical or rectangular) your parachute has, is yet another aspect that influences how fast the parachute can fly. With the same load, the airspeed of ellipticals is significantly more than the rectangular powered parachutes. So, to get that adrenaline rush, canopy pilots often tend to opt for ellipticals. However, controlling elliptical powered parachutes in the mid air requires expertise as poor maneuvering can cause serious accidents. Hence, if you are not sure about your flying skills, choose the rectangular parachutes.

Every powered parachute comes with a predetermined weight limit which indicates the amount of weight the vehicle can carry. You can get this information from the owner itself. The strength of the canopy and the PPC frame influence the payload of the parachute. In general, a 2 seater parachute can carry up to 400 to 550 lbs.

The amount of weight a parachute lifts has a great impact on its speed. A powered parachute that has a large carrying capacity can fly at a faster speed than a one whose payload is significantly less.

Wing loading refers to the ratio of mass of flying vehicle to the area of its wings. In case of powered parachute, wing load is calculated by dividing equipment weight with the canopy size (the actual parachute). It is observed that higher the wing load, better the stability and faster the speed of the parachute.

There are a number of websites that offer second-hand powered parachutes for sale and it is also possible to bargain and reduce the price. Some websites also sell used powered parachutes that are flown and tested so that you can enjoy the ride without facing any problem. A brand new powered parachute is priced at approximately $14000. On the other hand, used PPCs on sale cost much less, around $7000-$10000.

Although powered parachutes can easily attain a height of 10000 feet but most pilots prefer to fly at altitudes ranging from 500 to 1200 feet. Flying at a low constant speed is the safest way for an enjoyable ride.