The passion or love for riding can be seen through the love and care any motorcycling enthusiast or biker showers on his or her machine. These individuals may seem all hard and tough on the exterior but can sometimes expresses themselves in thoughtful words too. ThrillSpire has compiled below 40 inspirational quotes and sayings that any biker or motorcyclist can live by.

The passion or love for riding can be seen through the love and care any motorcycling enthusiast or biker showers on his or her machine. These individuals may seem all hard and tough on the exterior but can sometimes expresses themselves in thoughtful words too. ThrillSpire has compiled below 40 inspirational quotes and sayings that any biker or motorcyclist can live by. 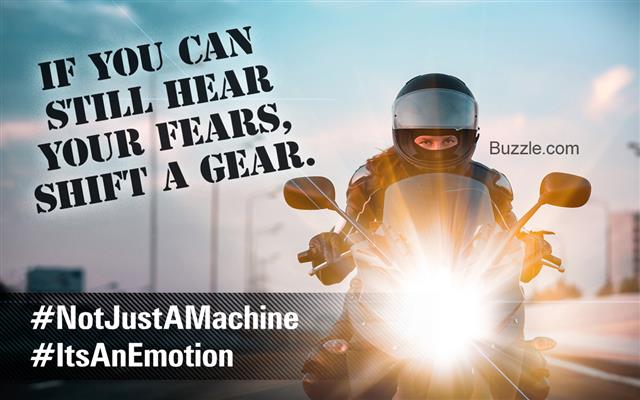 Mrs. Sally Halterman, from Washington D.C., was the first woman to be issued a license to ride a motorcycle in the year 1937.

Riding a motorcycle involves handling a curious collection of various elements like noise, danger, speed, balance, physical skill, and mechanics. It is not surprising then that some people are obsessed with motorcycles, wind blowing across their faces, following the road, feeling free and wild. You can instantly recognize a motorcyclist because of his/her signature leather jacket, swanky helmet, leather gloves, and of course, his/her beautiful machine.

Riding a bike can be a thrilling and wonderful experience, it can symbolize control, can put your mind at ease, and on a more practical note, a bike can easily get you out of any traffic jam. Plus, imagine all the attention you get if you are riding a sexy bike!

Of the numerous sayings and quotes that aptly express the thrill and philosophy behind biking, we have selected 40 examples that include quotes from writers, philosophers, famous motorcyclists; while the sources of some remain unknown. So sit back and enjoy these quotes!

“Note to self: Never ride a motorcycle in stilettos and a miniskirt.”
― Maggie Grace

“I don’t really feel like going for a ride today. Said no motorcycle rider ever.”
― Anonymous

“The only thing better than a streetbike.. is a woman riding one.”
― Anonymous

“My first car was a motorcycle.”
― Adam Carolla

“Life is not about waiting for the storms to pass: it’s about learning how to ride in the rain!”
― Anonymous

“A bike on the road is worth two in the shed.”
― Anonymous

“You are on your own. You are not protected by two tons of steel, rubber, foam padding and safety glass. Neither are you steering two tons of guided missile toward other cars, people and property. If you are prepared to accept the responsibility of your own actions, then motorcycling can be both safe and thrilling. Riding is an art as well as a craft and no amount of explanation can take the place of experience.
― Theresa Wallach, Easy Motorcycle Riding, 1970

“It wasn’t until I went to college and I got my first motorcycle that I understood the thrill of speed.”
― Vin Diesel

“I look my best when i take my helmet off after a long motorcycle ride. I have a glow and a bit of helmet hair.”
― Eric Bana

“Only a biker knows why a dog sticks his head out of a car window.”
― Anonymous

“There’s two kinds of riders: Those who have crashed and those who will.”
― Anonymous

“The older I get, the faster I was. There are old bikers and there are bold bikers, but there are no old, bold bikers.”
― Evel Knievel

“All girls like guys who are tough. Obviously, riding a motorcycle – I don’t want to say that there’s a bad boy quality – but there’s definitely a tough and macho thing about a guy who rides a motorcycles and that element of danger. That’s really sexy.”
― Marisa Miller

“I asked God for a bike, but I know God doesn’t work that way. So I stole a bike and asked for forgiveness.”
― Emo Philips

“You do not need a therapist if you own a motorcycle, any kind of motorcycle!”
― Dan Aykroyd

“When I was old enough to ride a motorcycle and got my license, I bought a ’69 Sportster.”
― Chuck Zito

“That is why, as soon as I felt a real attraction for my first passion which was the motorcycle, and in spite of the danger it could represent, they encouraged me.”
― Jacky Ickx

“The perfect man? A poet on a motorcycle.”
― Lucinda Williams

“Never ride faster than your guardian angel can fly.”
― Anonymous

“Animals travel on all fours. Mankind on two. Motorcycling is not a means of transport but an ideology, a nomadic way of life.”
― Amit Reddy

“Most motorcycle problems are caused by the nut that connects the handlebars to the saddle.”
― Anonymous

“Why is Jim the only one in the plant to have money….Because he rides the new Harley Hummer.”
― Harley Davidson Ad, 1954

“A cold hamburger can be reheated quite nicely by strapping it to an exhaust pipe and riding forty miles.”
― Anonymous

“I want to ride my motorcycle up the side of the Luxor to the light and vanish.”
― Criss Angel

“I did some great work with my Calvin Klein ads on the motorcycle. It was really groundbreaking because people hadn’t seen a woman actually riding a motorcycle before.”
― Carre Otis

“People are like Motorcycles: each is customized a bit differently.”
― Anonymous

“Thin leather looks good in the bar, but it won’t save your butt from “road rash” if you go down.”
― Anonymous

“The only good view of a thunderstorm is in your rearview mirror.”
― Anonymous

“Sometimes it takes a whole tankful of fuel before you can think straight.”
― Anonymous