A Guide to the Types of Bicycle Handlebar – Choose the Best!

Puzzled by the different types of handlebars that you find on bicycles? Worry not, for here's help! This post will tell you a little about each type, along with the benefits. Have a look!

Home / General / A Guide to the Types of Bicycle Handlebar – Choose the Best! 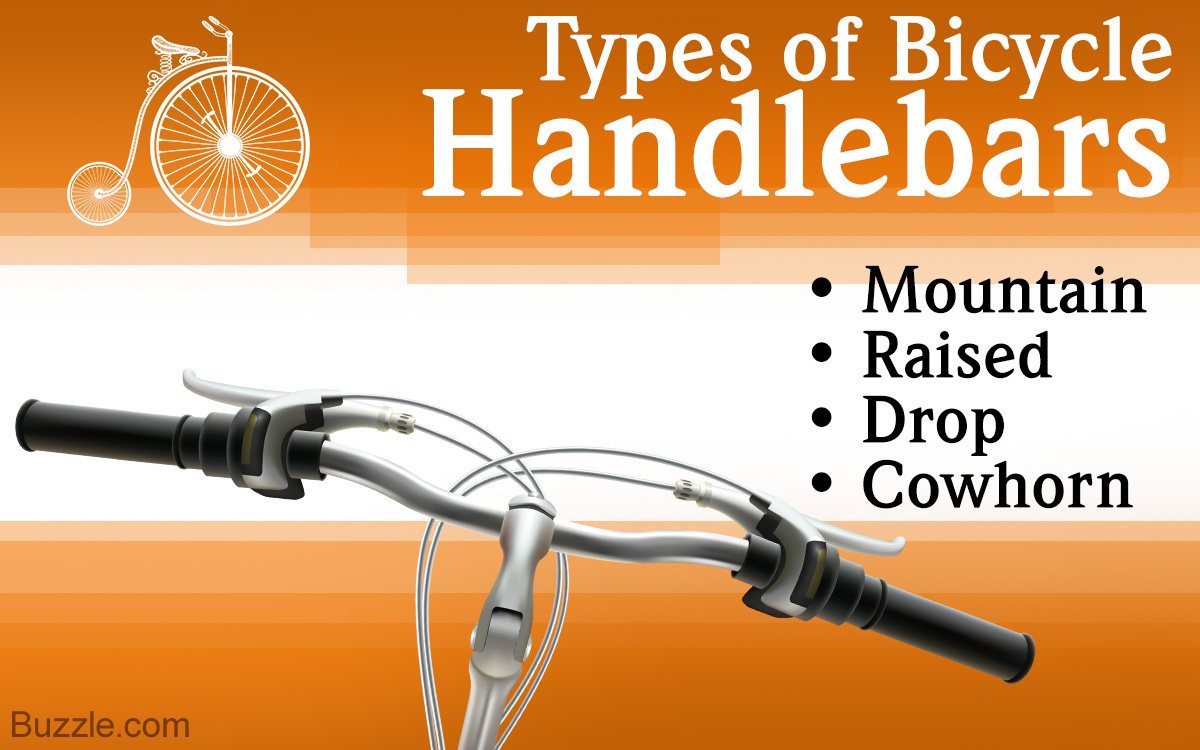 Puzzled by the different types of handlebars that you find on bicycles? Worry not, for here’s help! This post will tell you a little about each type, along with the benefits. Have a look!

► The term ‘bicycle’ has its origin in 19th century France.
► Americans are one of the least frequent users of bicycles in the world!
► Four categories of cycling events are included in the Olympic Games. They are road racing, track racing, Olympic BMX (Bicycle Moto Cross), and mountain biking.

The handlebar is a key part of your bicycle as it helps you in maneuvering your bike and also in controlling its speed and direction. Just as there are many types of bicycles available today, a variety of handlebars are on offer as well. While choosing a bicycle handlebar, you should consider if it is compatible with the make of your bicycle. These handlebars were designed keeping in mind the different riding conditions. While some are meant for use on touring bicycles, others are more apt for racing bikes. Also, the number of grip positions vary and so does the comfort level for long rides.

Also known as straight handlebars, mountain handlebars are perfectly horizontal and are found on mountain bikes, hence the name. They provide better grip and better control, which makes it easy for the rider to steer the bike on rough and unfriendly terrain. Also, better control makes it easier for the rider to take sharp turns smoothly and safely. However, mountain handlebars come with a major drawback: a single hand position, which means you can hold the handle only in the elbow-out position. This can be quite uncomfortable on long rides, and that is why you can ride a bicycle with a straight handlebar, only for short distances. However, if you wish to, you can overcome the problem of a single grip position by adding vertical attachments called bar ends to both the ends of the handlebar.

Raised handlebars are horizontal at the ends but the central part of the handle is roughly “U-shaped”. Such a handlebar is attached to the steering stem at the center, and is also referred to as an upright handlebar. It gives you two hand positions to choose from: you can either hold it close to the “U” at the center, or a little farther away from it. Mostly found on hybrid bicycles, these handlebars do not offer much comfort to the rider. Just like mountain handlebars, raised handlebars are unsuitable for bicycles used for long distance rides. When it comes to the quality of grip and control, raised handlebars are almost at par with their mountain counterparts, making them the second best choice for short distance off-the-road riding.

The biggest advantage of a drop handlebar is that it offers the rider four different hand positions. Popular for road bikes, drop handlebars are the ones that provide the maximum comfort over long distances. If you look at a drop handlebar, you’ll find that it extends outwards before forming an inward curve and appears similar to a ram’s horn. Now, if you are wondering which are the four grip positions, then let me tell you that you can grip a drop handlebar close to the steering stem, at the first bend of the handlebar, at the portion extending outwards, or at the bottom part of the curve that is pointing towards you. A bicycle with a drop handlebar gives you the advantage of dodging a strong headwind easily by positioning yourself such that your back is bent forward and your head is lowered. Not only this, the different positions offered allows the rider to enjoy a comfortable ride by changing his position depending on the weather conditions or the kind of terrain.

Trekking handlebars, also known as butterfly handlebars, offer you five different hand positions. Best suited for use on trekking bikes, these handlebars are easier on the shoulder and back, which makes it easier for you to ride long distances. If you look at the picture of the handlebar, you shall see that it forms a C-shaped curve on both sides of the stem. You can grip the handlebar at the four bends and also at its horizontal part. The fact that three of the five hand positions are convenient for a rider sitting in an upright posture, proves to be an advantage because most people tend to sit upright while riding a bicycle. However, if the rider is faced with a situation whereby he has to bend forward while riding (such as on the face of strong winds), the remaining two hand positions will come to his rescue!

Why are mustache handlebars called so? Well, just look at the image given alongside that shows the top view of one such handlebar, and you’ll see that it looks exactly like a mustache! They are similar to the trekking or butterfly handlebars in design and are used in trekking bikes. The mustache handlebar offers four different hand positions. While three of these positions allow you to ride sitting upright, you can grip the vertical end of the bar in case you wish to ride low, in certain situations. Just like trekking handlebars, mustache handlebars are also meant to make long rides easier and more comfortable for the rider.

Also known as pursuit or bullhorn handlebars, the cowhorn handlebars look distinctly different from the other types. One look at these handlebars and you are sure to be reminded of bovine horns! So, how does such a design help, you may ask. Originally designed to be used on bicycles meant for track racing, these handlebars are best suited for off-road riding. Normally, a cowhorn handlebar offers the rider three different hand positions. However, if you wish to add to it, you can easily do so by attaching bar-ends to both the ends of the handlebar. Interestingly, you can even construct a cowhorn handlebar yourself, provided your bicycle has a drop handlebar. Just remove the drop handlebar from the steering stem of the bicycle and chop off the drops. Then fix it to the bicycle stem, this time in an upside-down position! Cowhorn handlebars can be used on your touring bicycle as well, if a drop position is not what you need very often.

Note that the handlebars will be wrapped in cork or synthetic “bar tape”, which are meant to provide you a good grip wherever you choose to put your hands. So, make sure you check out the various types of bicycle handlebars to have that perfect bike!