What is a Rebreather and How does it Work?

Inefficiency of the conventional SCUBA (acronym for Self-Contained Underwater Breathing Apparatus) apparatus has led to the emergence of the Rebreather. To know more about this new apparatus and its working, go through this ThrillSpire article.

Home / Water Sports / What is a Rebreather and How does it Work?

Inefficiency of the conventional SCUBA (acronym for Self-Contained Underwater Breathing Apparatus) apparatus has led to the emergence of the Rebreather. To know more about this new apparatus and its working, go through this ThrillSpire article.

Since the rebreather has a closed circuit, carbon dioxide is not released in the surroundings. Hence, there are no bubbles to alarm marine life, enhancing your underwater exploration.

To understand a rebreather and its working better, it is important to know a little about conventional SCUBA and its flaws. These flaws were instrumental in the creation of this new device. The traditional or open-circuit SCUBA comprises a compressed gas supply and a demand regulator from which the diver breathes. The name open-circuit is given to the device because the exhaled gas, i.e., carbon dioxide, is released in the surrounding water and not reused in any form. A scuba diving apparatus has three main components- an inhalation connection, a high-pressure tank, and a pressure regulator.

The main drawback of conventional scuba diving equipment is that when you exhale carbon dioxide it is discarded into the environment. Also, only a very small amount of total inhaled oxygen is used by the diver for metabolism, and a great amount of reusable oxygen is simply wasted in the whole process. Furthermore, as the diver goes deeper and deeper, there is an increase in the loss of reusable oxygen.

What is a Rebreather?

It is a type of diving apparatus that is different from the traditional scuba breathing gear. A rebreather recirculates the breathing gas exhaled by the diver. There are three types of rebreathers – oxygen rebreathers, semi-closed rebreathers, and closed-circuit rebreathers.

All theses devices work differently, but have some basic components in common, which are:

The Breathing Loop, which consists of:

The Gas Replenishment System, which consists of:

Components of a Rebreather and Their Working

Although there are some differences in the functioning of each rebreather, the basic task that they perform is the same. Following are the parts of a rebreather and their functions:

The breathing loop comprises two breathing hoses, which connect the mouthpiece to the rest of the breathing circuit, specifically the scrubber and counterlungs. These hoses need to be flexible enough to make it more comfortable for the diver to inhale and exhale.

It is one of the most essential components of a rebreather as it helps to inhale and exhale the gas. Counterlungs comprise two bags, one for inhalation and the other for exhalation of the gas. The pressure relief valves are designed to maintain the lung pressure below 40m bar. The valves can be overruled for expelling excessive water from the counterlungs underwater and for manual gas release during ascents. There are two types of counterlungs to choose from – over-the-shoulder counterlungs, and back-mounted counterlungs.

It is the source of oxygen that is required to replenish the used oxygen by the diver. Depending upon the diver’s rebreather design, the gas cylinder will carry pure oxygen or gas mixtures for the replenishment of the used gas. Since pure oxygen is not considered safe for diving deeper than six meters, the diver also carries a cylinder of diluent gas. This cylinder may be filled with compressed air or another gas such as nitrox or trimix. These diluent gases reduce the percentage of pure oxygen and allow the diver to explore greater depths.

These carry pure oxygen in the cylinder, which is the only gas supply. This may increase the risk of oxygen toxicity and therefore, limit the diver to a certain depth.

These, unlike oxygen rebreathers, use gas mixtures for the gas supply, which enhances the scope for greater depths. Also, there is no risk of oxygen toxicity with these rebreathers.

These are equipped with both the pure oxygen gas and gas mixtures. They are more efficient than the other two types because of their capacity to maintain the oxygen concentration. 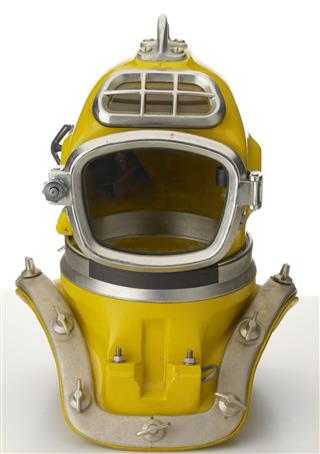 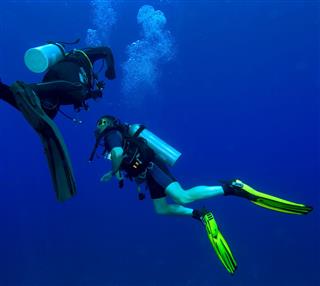 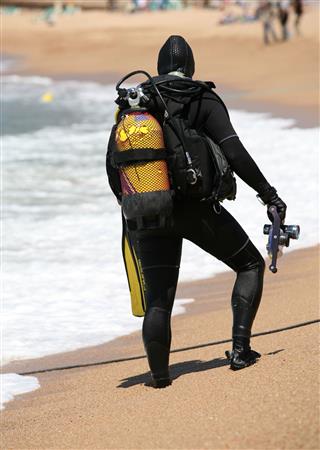 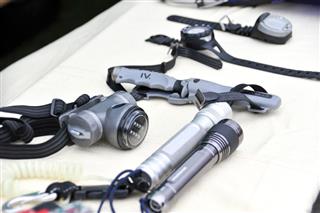 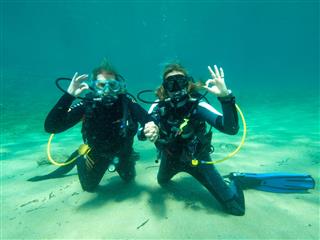 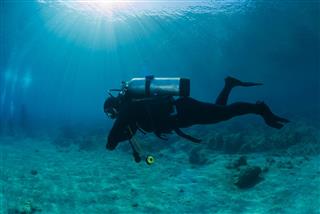